The city is investing nearly $150,000 to restore the mermaid fountain at Pineapple Park — and that’s just the beginning of its plans to improve the downtown space.

Officials held a dedication ceremony to celebrate the improvements to the public park at Lemon and Pineapple avenues, dubbed “Good Heart Plaza.”

That was 2005. Twelve years later, the fountain is in worse condition than ever. In addition to the wear to the artwork, the infrastructure of the fountain is failing, too.

The water is no longer running. Calcium has built up on the decorative tiles. The marcite that lines the pools on either side needs to be replaced.

Thanks to a push from residents, the city is once again embarking on an effort to restore the fountain. Pineapple Park has been a controversial topic during the past two years. The city’s decision to sell a piece of property adjacent to the park drew negative feedback from people who sought to preserve the land for public use.

With that matter finally settled — a developer plans to build a two-story commercial building on the former city property — the focus has shifted to improving Pineapple Park. That starts with the fountain.

City staff is working with Matthews and artist Danielle Glaysher-Cobian to restore the artwork. Beyond refreshing the paint and repairing the cracks in the concrete, Matthews said the overhaul will make it a more complete piece than it’s ever been.

“The water’s going to be working the way it once was,” Matthews said. “The lights in both domes — which have never been on — are going to be on.”

Cliff Smith, a senior planner with the city, said the project can be divided into two components. The artwork restoration and the infrastructure improvements are separate endeavors, but they’re being undertaken at the same time so one portion doesn’t interfere with the other.

Smith and Matthews said the improvements are a daunting process. Smith used the example of removing calcium from the tiles to show how involved the restorations can be.

“Calcium is a base, so you’d need a 5% acidic solution to dissolve the calcium,” Smith said. “Then, you’d take baking soda to neutralize the acid as part of the cleaning process. You’d use little wooden spoons to remove any flaking of the calcite off of there. It’s a very intricate process — and that’s just on one tile.”

A private donation in 2005 set aside another $27,500 specifically for improvements to the fountain — although the city lost track of that money until 2015, which residents pointed to as a sign of the neglect Pineapple Park has seen during the past 12 years.

The city is determined to do more than just refurbish the fountain. On Thursday, staff is holding a public workshop to get feedback regarding the future of Pineapple Park. Downtown residents such as Barbara Campo have advocated for significant improvements to the park, arguing that the core of the city is lacking engaging public spaces as the population increases.

The impending construction of the 11-story, 157-unit The Mark condominium project on State Street will likely add to the demand for a more vibrant Pineapple Park, Matthews said. 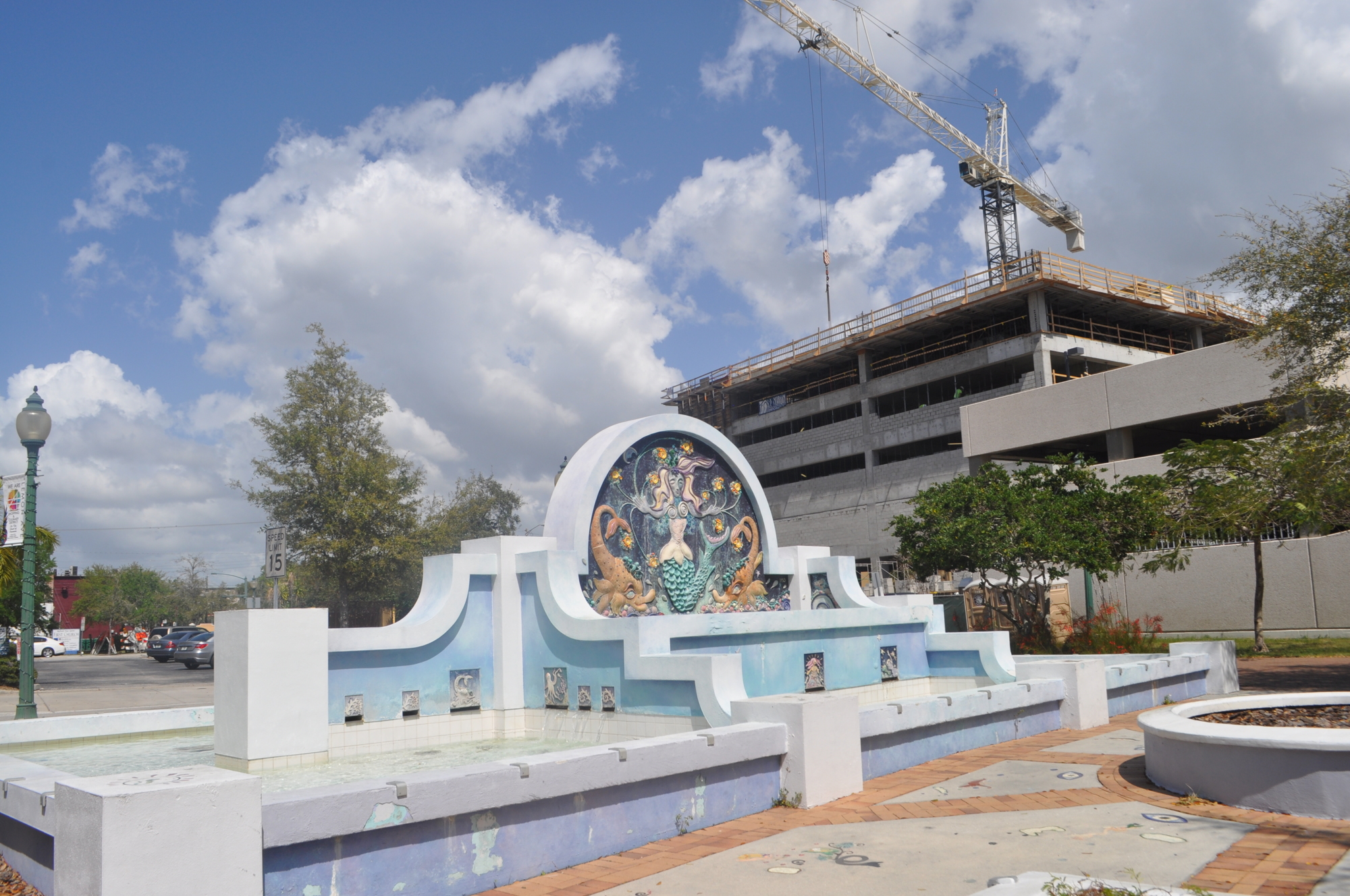 Public Works General Manager Todd Kucharski will lead the conversation regarding possible Pineapple Park improvements. He said the history of the park helps explain the condition it’s in today. When it was established in 1992, the park was one larger, contiguous space. In the 2000s, however, the city rerouted Lemon Avenue, bisecting the park in the process.

Kucharski said the location of the fountain was chosen with the original footprint of the park in mind. Working with a consultant, the city intends to develop a new master plan for improvements.

“I think what we need to do is focus on that park alone,” Kucharski said. “What can we do to enhance this public space, create positive activities and energy in the park and create that connection for people in downtown?”

The city also intends to develop a plan for enhancing the streetscape along the portion of Lemon Avenue south of Main Street. Kucharski said the city is considering extending the brick-paved Lemon Avenue mall south to Pineapple Avenue.

Ideally, Kucharski said, the city would finalize a master plan for the park before the budget process this summer, so staff can begin the process of securing funding for any improvements. He’s not putting a hard timeline on it, though. Input from residents will drive the conversation surrounding Pineapple Park.

Smith said the repairs should be finished by early May. Although the project involves a series of complex variables, the artists and the city are determined to complete the second major restoration of Good Heart Place — and hopefully have a more lasting impact than the previous effort.

“This is a very high-priority project,” Smith said. “It’s very important to the city. Everything should be vibrant. It should be an amazing piece again. It should be a focal point for that park.”

by: David Conway with The Observer