Downtown Sarasota condo and apartment residents have contributed to over sixty percent of the city’s population growth over the past five years….And will do it again in the next 5 years.

Even with 12,000 residents spread throughout the Downtown Zone Districts sprawling from Gulfstream, the Bayfront, The Rosemary District, Golden Gate Point, Historic Palm Ave. and along Main Street, one would never guess that this demographic contributed to 56% of Sarasota’s city-wide residential real estate sales during the first quarter of 2021. These sales in a land area of only 7% of the City, around 1.7 sq miles.

The Downtown Sarasota Condo Association (DSCA) conducted a study that reveals their members’ area accounted for sixty percent of the entire city-wide population growth over the past five years. The Rosemary district alone, located just north of downtown Sarasota is booming with an estimated 68% growth between 2014 and 2020.

Based on recent parcel-by-parcel analysis of the Downtown Sarasota Condo Associations community, there are over 12,000 residents currently living in the greater downtown zone district. The above chart includes projections for future projects where site plans are available or construction is already underway!

With this downtown neighborhood area, population is projected to exceed 15,000 by 2026. This equates to an average four percent annual increase between 2020 and 2026. Comparing downtown’s growth projections to the overall city growth projected at 1.4% annually.

The DSCA Board and its committee chairs will continue to further collaborate with City staff, the City Commission, downtown business organizations and area residents. This collaboration will strategically address the implications this current growth and approaching 30% surge in population will have on walkability, pedestrian safety, connectivity (pedestrian, bike and vehicular), parks canopy trees and barrier island access. Much further work is needed to complement the already planned installation of roundabouts, adding trolley service, improvements to Ringling.

Future construction plans that are in motion, however not under construction, show that of the 1,320 new dwellings, approximately two-thirds will be apartments and one-third will be condominium units or townhomes.  But wait, the figures the DSCA unraveled are even more impressive when the DSCA dove into the city of Sarasota’s residential sales transactions. 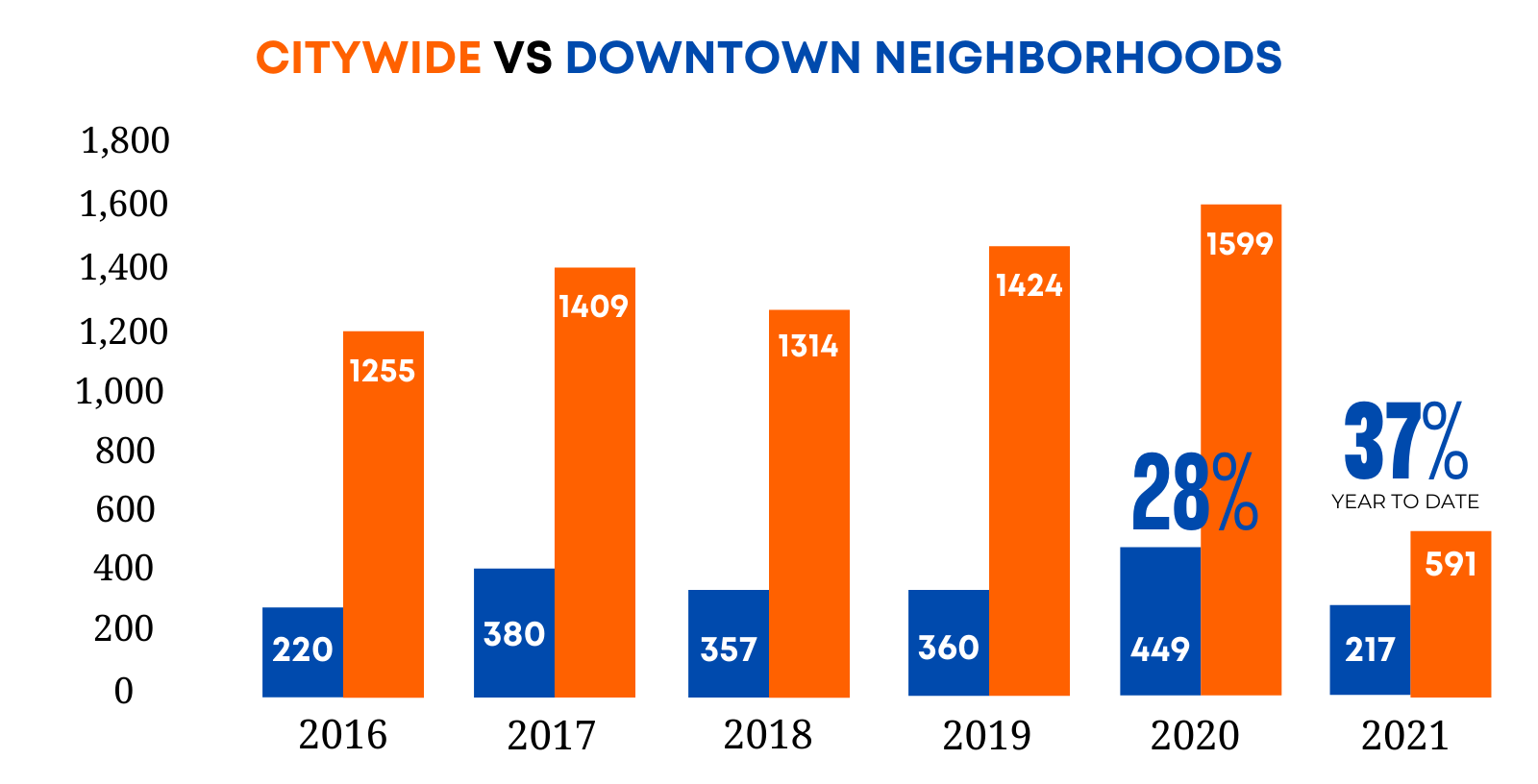 THE NUMBER of downtown Sarasota residentials sales contributed to 28% of the total number of homes sold in the city of Sarasota in 2020 and through the first quarter of 2021, this sweepingly influential new population has already contributed to 37% of the city’s residential sales.

Of the total $716 million in 2021 sales year-to-date (Jan-April) the $403 million in transactions occurred in the DSCA area.  Which means, the residential dwellings in the Downtown Sarasota Condo Association’s area contributed to 56% of all real estate transactions in the City of Sarasota.  Per the chart, in 2020 this district contributed to 36% of the total city-wide sales volume.

In addition to the obvious increase in property tax assessments for existing and new construction, the 1,700 new DSCA residential projects could total around $10 million (assume $6,000 is paid per new unit) in future Multimodal Transportation Impact fee contributions. Park Impact fees to support the projected 1,700 new units could collect an additional $3 million in revenue to the City of Sarasota.  That’s assuming $2,000 is paid per unit.  In total, construction projects in the DSCA neighborhood are projected to contribute over 14 millions dollars in additional impact fees into City funds available for infrastructure and park needs.

David Lough, President of the DSCA shares “it was remarkable just how quickly downtown has populated. As a resident of the Rosemary District it’s not surprising much of the city’s major growth is happening in our district which is located just north of downtown. Looking forward, Lough says, future growth will shift to be a bit more balanced throughout the DSCA area, this to the southwest at the Quay parcels and further to the east along Main.” “Lough says, there is a tremendous opportunity to work together to manage the growth that we know lies before us. We are certain it’s coming, let’s do this best possible job to keep Sarasota the wonderful, vibrant, art and cultural hub it is. Without a jointly agreed strategy, plans and infrastructure investments our quality of life will suffer in the future. What’s actionable now?, Lough observes “the City’s fiscal 2022 budget is under preparation. Wouldn’t it be wise to allocate money in budgets with the dramatic changes in downtown in mind?”