The Past, Present, and Future of the Van Wezel Performing Arts Hall

Home/The Past, Present, and Future of the Van Wezel Performing Arts Hall

This event has passed. 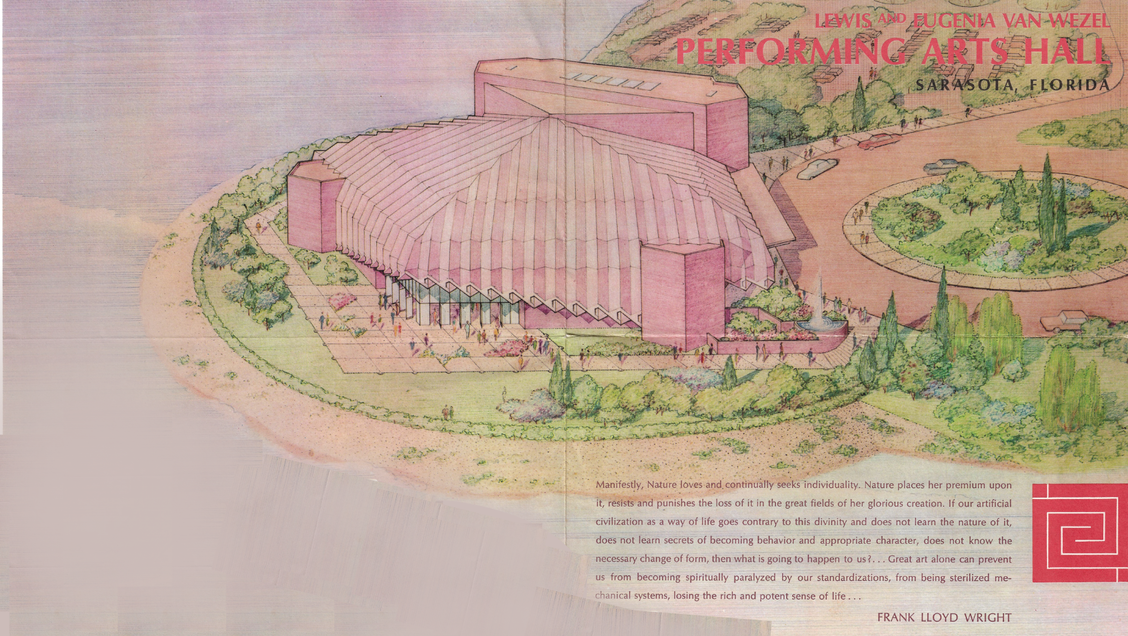 The Past, Present, and Future of the Van Wezel Performing Arts Hall

A community conversation organized and presented by the Sarasota Alliance for Historic Preservation
and the Historical Society of Sarasota County.

Free event, no reservations required. Seating approx. 100.
This important community discussion about Sarasota’s Van Wezel Performing Arts Hall will include presentations about the history of the building and its architectural significance, its current condition and the viability of having it continue as Sarasota’s Performing Arts Hall. Van Wezel family members have been invited to participate.

Professionals in the fields of architecture, finance, and the arts will provide information about the current status of the Van Wezel Performing Arts Hall and entertain questions from the audience.

Sarasota County Commissioner Mark Smith, AIA
Mark Smith was recently elected to the Sarasota Board of County Commissioners and is the founder of Smith Architects, P.A., located in Siesta Key Village. A longtime resident, he graduated from Riverview High School in 1973, and has long been an active member of the Siesta Key community including service on numerous neighborhood associations. Mark served as President of the Florida Association of the American Institute of Architects (AIA) in 2007, and received the 2009 AIA Florida Silver Medal in recognition of his years of leadership and service.

Carolyn Michel, Actress
A longtime member of the Van Wezel Foundation, Carolyn Michel has been a resident actor at the Asolo Repertory Theatre for 24 seasons, as well as numerous stage credits with Florida Studio Theatre and WestCoast Black Theatre Troupe. Carolyn has performed in theatres throughout the country, with Cape Playhouse and Peterborough Players among her favorites. In addition, she has volunteered to produce and/or emcee benefits to raise funds for many not-for-profits.

Ron Kashden, CPA
Ron Kashden is a Certified Public Accountant and expert in financial and partnership accounting. His professional experience includes service as the auditor of New York’s Shubert Organization which owns most of the presenting theaters on Broadway. Ron has lived in Sarasota since 2011 and owns a home listed in the National Register of Historic Places in Laurel Park.

Moderated By:
Mollie Cardamone
Mollie Cardamone founded the Coalition of City Neighborhoods Association and served as its President. She served eight years as a City Commissioner and two years as Mayor of the City of Sarasota. During her elected years she approved the plans for renovations to the Van Wezel Performing Arts Hall that were completed in the early 2000’s. Commissioner Cardamone worked primarily in the area of economic re-development and neighborhood preservation during her years of service on the Commission. In 2000 the Florida Redevelopment Association named her as the elected official who had “done the most to promote re-development in their community”.